The Story of Bernard and Bev 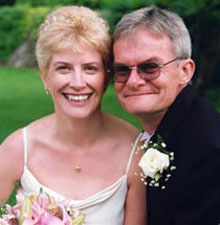 Bernard and Bev met at the end of April in 2004 and they were married just 16 weeks later!

Katharine advised Bernard to write to everyone on his first list of possible contacts. So there were eight letters, four replies, and two cancelled dates before Bernard had a phone call from Bev. That first conversation didn’t go very well. This was partly because Bernard felt ‘twice bitten twice shy’ by the cancelled dates and partly because he had to leave the house for an appointment! However, they met a couple of weeks after that.

Bev simply felt it was right to reply to Bernard’s letter. She had no feeling that it would lead anywhere.

The first date was at a busy restaurant near where Bev lived and the two of them talked for hours. They agreed to meet for another dinner date a week later, and as they left that restaurant Bernard proposed to Bev!

A year after their first meeting (and eight months after their wedding!) they are totally convinced that they have done the right thing. They recommend friendsfirst!!

“Thank you so much for all your help and hard work in finding me a friend. I have enclosed my first letter and I also received my first contact from […]

“It’s definitely an advantage being able to talk to the people who run the organisation. That makes a big difference. Thank you.’

“Thank you for all the help and advice you gave me after I received my first set of profiles. I really appreciate your kindness and efficiency”