Christine and Peter on their wedding day at their reception – their individual stories are below and make heartwarming reading!

After being married for 21 years, my husband, who was an elder in the church 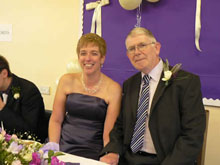 we had been in for 25 years, left me a note and went off with a lady from chruch, leaving me with our 2 sons who were 11 and 12 at the time. I would have liked to have got married again as I didn’t want to spend the rest of my life on my own, but didn’t think I would ever meet anyone suitable.  A friend had joined friendsfirst and got married after a whirlwind romance, but I dind’t think it would work for me. I joined friendsfirst about 3 years later, at the end of 2006. I read and reread the little booklet friendsfirst sent me and decided I had to be proactive if my membership was going to work. (I was born in Yorkshire and didn’t have a lot of money to spare, so I was determined to get my money’s worth!)

Peter’s profile came in the third mailing. I thought he sounded nice but lived too far away. I phoned and found out his village wasn’t where I had thought it was, but it was still 2 hours away by car. We seemed to get on alright on the phone, so I suggested we meet and he agreed.

We decided to meet in Buxton as it was midway between both of us. On the day, there was a severe weather warning given but we still went! It was wet and windy, the roads were flooding and lorries had been blown over onto their sides. We met in the car park, as arranged, had coffee, walked around the town and then had lunch. I felt very nervous but I enjoyed Peter’s company, he was really easy to talk to and I was surprised to find we had a lot in common. We decided to meet the following week. During our second meeting I realized that I really like Peter and the feeling seemed to be mutual. I felt very excited but yet I was filled with a sense of panic. I was terrified of making a big mistake and I didn’t want to hurt anybody or get hurt myself. I stopped sleeping and couldn’t eat. I had prayed about joining friendsfirst a lot, and eventually I realized that I should go with my feelings as I had committed it all to God and he had promised to look after me.

It wasn’t easy setting up meetings as I was a nurse, working alternate weekends and we both had church commitments. After we had met 5 times,  Peter came to my house and met my 2 sons and then I went to his house. I knew decision time was coming. At Easter weekend, after we had know one another for four months, Peter asked me to marry him, Without hesitation I said “Yes”, and we decided to get married 6 months later.

We had decided that I would move into Peter’s house. My sons were 18 and 19, one was to say behind ‘home alone’ whilst finishing his university course and the other was going to go for a gap year in Australia shortly after the wedding. Both were happy that I had met somebody, and secretly I think they were pleased to be ‘getting rid’ of Mum!

It is just about a year since we first met and I still have to pinch myself sometimes. God has been so good to me to allow me to meet such a wonderful person as Peter. It has been amazing to fall in love, and to feel like a teenager again, when I didn’t think it would ever happen to me. The best thing about it all is the sharing and companionship and the feeling of being respected, loved and cared for.

There have been many changes. I left my nursing job, my sons, my Mum, my friends and my church and moved to a village where I knew nobody. ‘Our’ church now, is a different denomination and very different to what I have been used to. There have been challenges and we have had our grumpy moments. I am learning many lessons, including how to be tolerant and to think before speaking. It has been hard to get used to considering someone else when making plans and decisions but by far the hardest thing has been to stop being so independent and self-sufficient, and let Peter look after me.

Until the beginning of last year, my life was comfortable but predictable with my busy job and church responsibilities taking up most of my time. I must confess that it was also rather lonely. Marriage had eluded me, probably largely because I had never felt especially happy in social situations – ‘small talk’ didn’t come easy and chatting up the opposite sex was never my forte. However, time was passing. I thought I would give friendsfirst a try as I wanted a relationship with a Christian.

I made contact with a number of ladies by phone, and met one of them, but none of these relationships developed. My January list of profiles arrived and I examined them for likely matches. Only one really appealed (it was the photo that attracted me first) but I thought Chesterfield was too far away. A couple of days later I was most surprised to receive a ‘phone call form that very lady. I don’t remembers exactly what she said, but something about the way she said it convinced me that I should pursue that matter further, whatever the distance, and we agreed to meet. We met several more times in Manchester, which was easy for both of us to get to.

It soon became apparent that Christine and I were getting on very well. Her lack of ‘airs and graces’ and total honesty in telling me about her divorce and her struggle in bringing up her two sons of her own, particularly appealed. Our relationship developed in leaps and bounds as we visited each others homes and churches and met family and friends.

We had a lovely inter-denominational (Baptist/C of E) wedding last October, when the church was packed out with friends from a wide variety of traditions. This has been followed by a 4 month steep learning curve for both of us! Our personalities are very different in some ways. Christine makes decisions quickly and acts on them straight away whenever she can, whereas I tend to mull things over, often for too long, and so things do not get done as quickly as they should. This has led to occasional difficult moments. In other ways we are very similar (both a bit mad!), yet our love for each other has shone through and seems to deepen further day by day.

I think two things are important in contacting people:-

At every opportunity we thank God that his grace holds no bounds and that he works in mysterious ways.

“I think you offer a wonderful service and I have really enjoyed the experience – so nice to have a personal call.”

“All your literature is so nice it reminds us that Christians have nice manners as well. I have very much enjoyed my conversations with Patricia. Wish Patricia well from me.

“ I love talking to you. You are so understanding ”

“Although it is very early in my membership, I feel that I have joined a really caring organisation”