If you are friends first you never know what will happen

The Story of David and Gill

The story behind David and Gill’s success.

I have been a Vicar in the Church of England for 25 years. I was married in 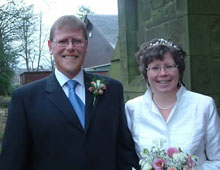 1981 and divorced in 2000; our four children remained with me. A year later, I ‘went out’ with a woman I had known in the 1970s (I also knew her ex-husband), but the relationship ended and I got on with being a lone parent. I felt confident about myself but didn’t know how to meet potential Christian ‘dates’, and after another year I was feeling very down about ‘meeting someone’. I thought that if I could walk into a room with a hundred single, Christian women, then there would be a good chance of hitting it off with a few of them. After all, in everyday life I meet lots of people, and I reckon that there’s a ‘bit of a spark’ every now and then – maybe with one in fifty? But then, they are usually married, or without a faith, or… and so on and so forth. I mentioned this to a friend and he suggested friendsfirst. It seemed to me that friendsfirst was just a modern way of walking into that room and meeting those single Christian women.

I made contact with friendsfirst, filled in the forms and waited. I thought that, as a middle- aged father of four Children, and a vicar to boot, my profile wouldn’t generate much interest. I expected to do most of the contacting. To my surprise, a large number of women contacted me during the first six months of my membership, and I contacted fifteen or twenty people myself. I always replied to contacts, even if it was to say, ‘Hello… er… I don’t think so’.

Gill contacted me early on. I was aware of how deceptive e-mail and phone calls can be so I suggested that we meet sooner rather than later. She wasn’t what I expected, and, as she explained, neither was I what she expected! But we got on famously and I thought ‘Well, this is nice… a friend’. I kept replying to new contacts (and making contacts myself), and I met six of them, two of them twice. After the summer, though, it was clear that Gill wanted to be more than friends, so we started ‘going out’ on a ‘let’s see where this goes’ basis.

As the year progressed, I still wasn’t sure how I felt or what I wanted. I knew that Gill was ahead of me which put me under pressure; I wanted to be fair to her, I didn’t want the relationship to stop, and yet I wasn’t ready to propose. I was also aware that Gill was being ear-bashed by certain people who thought that I was just stringing her along. The friendship, though, kept deepening, and we never seemed to run out of new things to say. Then it dawned on me that there were aspects of my past experience muddying the water. I needed to sort a few things out before I was ready to move on. After ‘going out’ for twelve months I realised that I wanted Gill, (the friend who I loved), to be the woman I loved and lived my life with. I asked her to marry me, and she said yes!

Looking back, I expected, when I joined friendsfirst, to be swept off my feet. In reality I think that when we are swept off our feet all we end up with is a very bruised backside! I think that, for Gill and I, it was absolutely right that we were friends first.

My book, (Marriage – Restoring our Vision published by BRF £7.99) was an early result of the friendship with Gill. She wanted to know what I thought, and taught, about relationships and asked if I had anything written down. I had a couple of talks about marriage which were on my computer, so I e-mailed them to her. She thought that they were very good, so with her encouragement (and critical eye) I wrote the book. For the past fifteen years members of my congregations had said ‘David, you should write some of this down’; it was Gill’s interest which got me writing.

When I joined friendsfirst I didn’t honestly expect it to result in marriage; after all, I was 45 and single, and this was just a different method of meeting people. Although sometimes I wanted someone else in my life, the rest of the time I was fairly OK. However, various people encouraged me to try friendsfirst to ‘see what happened’, so in that frame of mind I joined – and to see what God might want to bring about. Against all the advice, I contacted only one person on my first list of profiles. His reply, (which took ages) was friendly and amusing, so I wrote back, and then waited… and got fed up. I had a letter from someone else, which I replied to; he then phoned me, but there was little real communication. The first man then wrote again, but in the meantime I’d contacted David, whose details were on my second list. I’d liked his profile, so in February 2003 I emailed him; he replied quickly and so on. Then he phoned and we spent ages chatting, laughing, being frivolous, being serious and getting on fine – so he suggested we meet, and eight days later (actually on Valentine’s Day!) we did.

I was very tense beforehand. I thought “How can this person not be someone I could like in lots of other ways too?” So I was very nervous when we met – and decided straight away that I didn’t fancy him. (Hah!) He decided he didn’t fancy me either. (Double hah!) Once we’d admitted that, we both relaxed and started to talk properly, which we did for the rest of the afternoon, and on parting, and I was regretful that there hadn’t been a spark of attraction. However, I liked him a lot, so I thought, ‘Here’s someone I’d like to be really good friends with’. We kept on emailing fairly long letters, several times a week, and chatting on the phone at length about every 10 days or so; we talked about all sorts of spiritual, relationship, friendsfirst, and everyday things. Even though we thought we’d just stay friends, I didn’t ever contact anyone else on the lists because I was finding our depth of communication very satisfying.

The growing friendship with David was sufficiently fulfilling; it seemed odd to me to try and develop the same thing with someone else. As the months went by we had a few visits / days out, and my feelings began to change; I started to feel really close to him and I was beginning to think that I’d like things to go further. After about 6 months of this I decided I had to tell him, which was difficult, but also a relief – and David felt completely dropped on! After talking about it at some length, we ended up as “an item”.

The rest, as they say, is history. We were able to spend quite a lot of time together, and I soon began to feel that I wanted to marry David; we talked hypothetically about what we’d do if we did – length of engagement, kind of wedding, what we’d do with my house, etc. In some ways this was good, because it meant we’d already made a lot of decisions by the time we did get engaged; but once I decided I wanted to marry him I was desperate for him to ask me, so it was quite stressful discussing a possible future without guarantees. There were also tensions for us both (for different reasons). I was a single person contemplating leaving my job, selling up and moving into someone else’s house, family and life. He was a divorced person with four teenagers contemplating how I’d get on with them, where all my stuff would go (!) and how I might be different (or similar) to his first wife. (Just a few minor things then!) We also needed to get to know each other properly and appreciate the differences in our personalities – which takes time. Looking back, I’m glad we had a whole year of courting before he asked me to marry him; being older doesn’t mean anyone should rush into things. Our relationship grew and deepened in that time, which was necessary and important for us both; plus we had lots of fun together without the pressure of wedding plans etc. I felt increasingly sure that we would marry, and also more calm about our relationship and our future, and God gave me grace and patience to wait till David was ready.

We got engaged a year after starting to go out, and were married eleven weeks later on December 4th 2004. Our engagement was mixed with sadness because my father was taken into hospital and passed away 5 weeks before the wedding, but we had a very happy day – just immediate family and a few friends, followed by tea at the vicarage! Now we’re in the process of settling down together, and I’m getting used to being Mrs. instead of Miss, and a step-mother all at once! I always said I would never join a Christian singles agency, even though a friend of mine had met her husband that way. I thought that if God wanted me to be married, he could coincide my life with that person’s, rather than me having to engineer it.

However, I now think that friendsfirst is just another way of meeting someone – a kind of internet “going down the pub”. Judging by statistics, I know that I’m very fortunate to marry the second person I contacted, and I’m aware that other people make lots of contacts before finally meeting the right one, if at all; but I wanted to make contacts one at a time, and being friends first was a very important part of it. I think God did want to bring about our marriage – but as with so many things in life we both needed to take steps of faith and make our own decisions in order for him to bless us with the gift of each other.

“I think your service is excellent and I have really appreciated the personal touch. I have been very happy at the prompt and helpful response to my requests for assistance. […]

“I have found you easy to contact, your phone calls friendly, and the stories of others very encouraging. Overall your service has been excellent. I haven’t been active this year […]

“Dear Patricia, Thanks so much for the call last night – I did appreciate it and all the work that you are doing on behalf of the your members. You […]