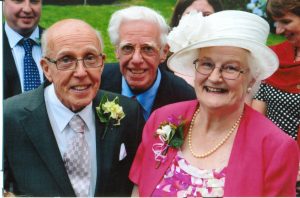 “I was a clergy widow who had nursed my husband through many years of ill health. After a few years, though I had many women friends, I really missed a man’s companionship. Whilst at Costa one day, I was reading the Daily Telegraph and saw the friendsfirst advert. I phoned the HQ and asked if I was too old (I’m in my 80s) to join. Katharine replied: “No, you are not!” and so I joined on the Gold level of membership receiving profiles every two months for the first year.

Out of the first batch of profiles I dutifully contacted all the men I was sent. One man lived locally and over the next year or so we went out several times to garden centres and parks having lunch and enjoying talking about our favourite subject of gardening. Another gentleman from Yorkshire met me and my cousin in York, and later visited me in Manchester for the day, but we couldn’t agree on certain matters of faith, so according to the friendsfirst advice, I wrote a letter of thanks closing our contact.

I was quite surprised by the profiles and letters I received from lonely men all over the country. Then a gentleman from Northern Ireland contacted me at the end of 2010. He had previously been on a cruise with a chap from his church and when we started writing to each other, he enquired if I would be interested to join him for a holiday. I thought I had better meet this man and said he if would like to visit Cheshire for a few days I knew of a good B&B near Manchester airport.

So we met and chatted happily sharing information about our families and churches, discovering again our love for music and art. He played for years in a Silver Band and I play the piano and organ. We both also enjoy painting water colours. A visit to Joddrell Bank, a meal out with my son and a trip round the Cheshire lanes completed his four day visit.

Then George invited me to visit him in Portadown and I stayed for two weeks with his lovely next door neighbour and enjoyed him driving me round the lovely countryside of  Northern Ireland. We visited a friend of mine in Bangor and of course I met his two sons, their wives and five grandchildren. That was a treat as I only have one who lives in Surrey. Then George decided to return with me for two weeks in Cheshire. By this time I realised that this dear man wanted a wife and seemed to have fallen in love with me!

“From the start of joining friends first I prayed and asked

that if God wanted me to marry again He would lead me to the right woman. I had lost my wife over ten years ago and more recently my eldest son who lived with us had died suddenly. I really did want someone to share my life again if this was God’s will for me. Dorothy wrote to me as she says, and when I visited Cheadle, the folks were very friendly especially at church. I was certainly attracted to Dorothy and felt in my heart that she was the one that the Lord wanted me to marry.

I then put the question to her “Will you marry me? To which she replied “Yes” which was good because at our age being 83 and 85 “We can’t waste time!”

Arrangements were made for our marriage which took place on July 28th 2012 – a lovely sunny day and such a happy occasion with a packed church, family and friends, including a good contingent from Northern Ireland.

So we both say a big thank you to friendsfrist for introducing us to each other!

George has a lovely home and he and Dorothy are currently packing up her house in Cheadle and hope to move to George’s home before Christmas. It’ll be a big wrench for Dorothy but they know God is faithful and they are going “step by step” which was the song played as they went down the aisle at St. Cuthberts church where they were married.

“Thank you for patiently listening to and discussing, my request for a few alterations to the draft enhanced profile which was, in any case, very well put together.”

“All your team are so very friendly and helpful”

“Your organisation has certainly been both reputable and successful for me. Thank you for your service. Please find enclosed a card thanking you. I am very happy with the service […]