Together with the foreknowledge of God 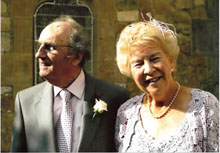 our wedding day which was on October 6th.

Were it not for friendsfirst Janet and myself would never have met, but in the goodness and foreknowledge of God we did meet and now we are very happily married, friendsfirst being the way and the means.

It would seem we must have joined friendsfirst at approximately the same time and although we both had ‘disappointments’ over the various  ‘contacts’ we individually make there did come a time when we met each other, then we knew! This was right, this was wonderful and, having met in April 2007, we were married seven months later.

It was a lovely Day and people said it was lovely wedding. It was kind of you to remember us, thank you for your card of congratulations and blessing.

We shall most certainly recommend friendsfirst should an occasion present itself. Many friends and family from all over the globe joined us in a packed church; we had in excess of 120 guests at the Reception which followed the service. 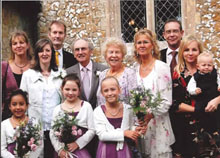 bereft. After 4 years I longed to be married again, to have a wife to love and cherish. As a committed Christian I prayed about the possibility of my meeting someone likeminded. I was told by one of my daughters, about friendsfirst and I joined them around September 2006.

Altogether I think around 12 to 14 contacts eventuated (out of a total of 49 – not bad for an 80 year old – Ed). Some wrote to me or telephoned, some I contacted. Over the following weeks and months I had two arranged meetings which went very well indeed but in due course and by mutual agrrement these friendships came to nothing. Yet to come, in April 2007, Janet wrote to me. We exchanged numerous letters and eventually we arranged to meet, roughly half way between where each of us lived. By then we had got to know quite a lot about each other and had exchanged photographs. After our meeting I think we both knew what the outcome was very likely to be!

Janet and I were married on the 6th October 2007, about 6 months after meeting each other!!

The encredible consequence of our first meeting each other was that within 10 minutes of that meeting, and, it was just the way our conversation went, it turned out that Janet’s father had been my own doctor’s partner some years ago and her father had also preached on many occasions at my own church in Londna and had even, for a while, lived just around the corner from where I lived when living in London. We discovered other remarkable ‘co-incidences’ too.

We can only say “This is the Lord’s doing and it is marvellous in our eyes”. We thank Him for bringing us together even though then, at that time we were 3 to 4 hours car journey from each other geographically.

I would encourage others to ‘keep on’, and to follow the sound advice which friendsfirst are able to offer, they will always do their best to help you. Don’t give up, talk to the Lord, He will lead and guide you.

I had been happily married to a clergyman for 43 1/2 years. Since his sudden death 8 years ago, I had busied myself in Christian work and my children and grandchildren. However, there came a time when I thought of the possibility of marrying again and so began to pray along those lines. friendsfirst was brought to my notice and I joined in August 2006. I eagerly awaited profiles that came each quarter and wrote to most of them and had replies and even met one gentleman! But – oh dear, not for me, perhaps my expectations were too high!

However, in March 2007 I hit rock bottom when only 1 profile arrived and he was 80 years old – my upper age limit! I barely read his story, but I did like his smiling face. My family happened to visit some days later and my daughter read the profile and her comment was “it could have been Daddy writing!” So I wrote to Barrie in Bath and this began a series of correspondence and we met on 21st April at a Vicarage in Somerset.

We discovered so many co-incidences, e.g. My father shared a practice with Barrie’s doctor in London and preached in the church he attended and lived only doors away. Needless to say it wasn’t long before we both knew our prayers had been answered and it was almost love at first sight!

It was a whirlwind romance and with 4 hours car journey apart, Barrie was soon selling his home and preparing to come and live with me in Sussex in time for our wedding on 6th October 2007.

At 73 and 80 there was no point in ‘hanging about’! We had an incredible wedding with a packed church and 120 at our reception (a glorified afternoon tea!)

We have never laughed so much and we are supremely happy in our love for each other and our shared joy in the Lord. Our children are amazed at our contentment with married life together.

So to our friends at friendsfirst we say a big thank you!

“Your service has been the best thing to happen to me for a long time. A long awaited service.”

“I appreciated being able to talk to member of staff in person because you give good advice.”