The story of John Cox and Phoebe Whitton

When my late wife Doreen was terminally ill, she encouraged me to remarry sometime in the future if I met the right lady, in the knowledge that perhaps I wouldn’t do too well living on my own for a long period with its associated loneliness. So after her death, although of course with very mixed emotions, it was not a hard decision to seek out a new life companion. Having seen an advertisement in a Christian magazine for friendsfirst, this seemed to be a good way forward although I had reservations because it seemed somewhat artificial. The reality of course is much different because I found I was able to meet ladies of a like mind. It is easier for men as there are generally more ladies actively seeking a companion. In my case,I found the lady of my dreams within a matter of weeks. After about six weeks from Phoebe’s initial contact by letter and subsequent telephone conversations, we arranged to meet up. Before this, I did have some misgivings about the fact that one of her sons was still at home but after all one is trying to trust God for the right outcome in all these contacts or meetings and once we met up, these concerns while still there, became less significant.

Having decided to join friendsfirst after reading the advert in ‘Woman Alive’ magazine, I looked forward to my regualar newsletter with its list of profiles. Although I received lots each time, I found there were relatively few I was inclined to contact. I joined in September 2003, and as time went on into the New Year, I did begin to be concerned why no-one had contacted me. Katharine was always reassuring and encouraged me to persevere. I did meet another gentleman and made several other telephone contacts but I was pleased when after several conversations with John, he suggested we met up. It does take courage and patience and I am really grateful for the ready support of the team at friendsfirst. 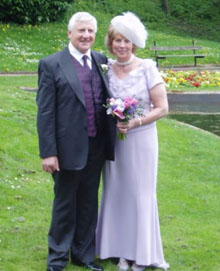 We felt at ease in one another’s company almost straight away and spent a very happy day talking and sharing together. We were amazed how easy conversation was and both thoroughly enjoyed the time. John continued on his travels away from home but our friendship grew rapidly even to the extent of him phoning  me everyday from Portugal while he was on a light aircraft training course! We had both experienced many years of marriage; John being widowed after 37 years and myself being divorced after 30 years, but felt so heart warmed to find new joy and friendship in each other. After 3 months, John proposed to me – although we were cautious to make this known wanting to be sensitive to our children and after October i.e. 5 months, we began planning our wedding for April 30th 2005. We both feel so very blessed and happy to now be together and especially because our respective children are so supportive and happy for us.

PS In Phoebe’s profile, she said she was looking for someone with a sense of adventure. Since they met, John has obtained his Mircrolight Pilot’s licence and 6 weeks after their wedding, he took Phoebe up for some sightseeing flights along the coast whilst they were on holiday in the Algarve! God certainly honours His Word – Eph.3.20.

‘your customer service is excellent’

“I have found you easy to contact, your phone calls friendly, and the stories of others very encouraging. Overall your service has been excellent. I haven’t been active this year […]

I am in receipt of copy of my profile , thanks. There is only one small amendment to make then it will be good and okay. You guys are doing […]