The Story of Ron and Rowena 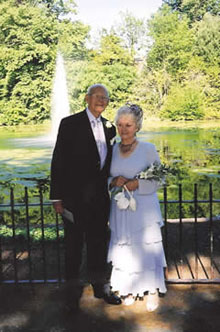 2006 following her marriage to Ron.

Here I hope with my now husband to thank you, firstly for your perseverance and encouragement during our time of friendship and then courtship. It was by no means an easy journey into our ultimate decision – firstly it was at your suggestion that I phoned the three gentlemen in their eighties – and after deciding to see Ron I thought that was that. However he phoned and persuaded me to meet him nearer my home in Surrey. Ron lives in Harrow and I live near Sutton in Surrey.  Well the second date was as unsuccessful as the first and I wrote to you as well as Ron to say I did not want to wate his time as I was not interested. However I had not barginned for Ron’s persistence, and so we met again: by this time he was introduced to my family who immediately took a liking to him which surprised me. Well Katharine Ron started going to my church and as our friendship became stronger I was invited and excepted into his family.

You probably have not heard of this expression ‘sitting on a fence with one foot in a safe place and the other on a banana skin’ – I could not make a decision – every time Ron asked me to marry him I said No. My friends and my daughter kept asking why, my six sons thought we should live together, which I could not do due to my faith in the Lord as a Christian. Ron ceased to ask me to marry him – but not to say he loved me very much still after 2 and a half years. Ron had stayed to go to church – it was a Saturday 18th February. I came downstairs and had my quiet time with the Lord and asked for a sign from the Lord whilst I prayed – and then suddenly felt very ashamed and sought the Lord’s forgiveness to stand in faith as I had always done.  As I finished praying a friend came  to visit about 9.30 that morning and then Ron appeared. He came and knelt on one knee and asked me to marry him. I said Yes I will. My friend sobbed her heart out and was so happy and excited – I had a stream of visitors and children coming and going and everyone was so happy for us.

Well eventually we went to the shops it was blowing and extremely cold – I was tired and frozen after shopping and waiting for a bus. Ron decided it was too cold and got a taxi – we had to walk through some buildings and wait. My teeth were chattering by this time. Suddenly I looked up and on this dirty wall was written the word HOPE in great big letters. I told Ron to look but of course this word did not mean so much to Ron as it profoundly meant to me, and a voice whispered in my heart – ‘first you stand in faith and believe in what you have asked; when my will is accomplished then I shall give thee a sign’.  Praise God for his promises when we stand on his word. So Katharine we got engaged on the 18th February and as you know married on July 15th 2006. I have enclosed some photo’s for you of us signing the register and at the reception.

Ron surprised me with his great sense of humour. He was taking me on a horse drawn canal boat to Southend but at our wedding reception he announced the horse had died so we were going on QE2  for a cruise! Yes we had a wonderful time. We intended a small wedding but none of our 36 grandchildren and great grand children, sons and daughters were having it. So with my large family too we had 110 guests – it was a blest wedding and everyone said they had a wonderful time – Ron was a verger at Westminster Abbey Winchester Ceathedral 30years ago and I could have married at the Abbey but decided on my small church. They were wonderful too and have taken Ron to their hearts. He was baptised by full immersion – after all the years of services to be born again and to know Jesus as his personal Lord and Saviour.

There is a story to tell of my faith as my wedding dress was ruined 1 day before the wedding – but because I had placed everything in God’s capable hands he even provided that at the last moment. Well my dear many thanks for your encouragement and help. God Bless you, With love in Jesus, Ron and Rowena.

PS Hope and why. Hope opens a door where despair closes them. Hope discovers what can be done instead of grumbling. Hope draws its power from deep trust in God and the basic goodness of mankind. Hope lights a candle instead of cursing the darkness. Hope in God can and does accomplish all things.

“Your service has been good. It has been a wonderful experience to fellowship with other believers. I thank you for your services throughout the year. I have chosen not to […]

“Please find enclosed some letters with stamps and Box Numbers for forwarding to potential suitors. Thank you for a First Class and brilliant means by which us ‘singletons’ can connect […]

“What a lovely surprise to receive a birthday card from you kind folks!! Thank you so much for your thoughtfulness – I really appreciate it very much”

“Indeed I was very pleased to receive the profiles you sent me. Thank you also for your letter and the template for guidance, taken together with the previous generally more […]